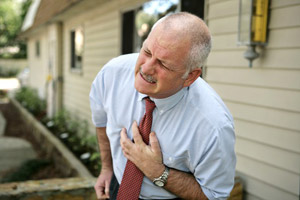 One out of three Americans will die from heart disease, and it remains the number one killer in America, which amounts to 1 person every 30 seconds.  This is largely due to the fixation we have on meats and animal fats in this country.  High blood pressure (BP) is the leading cause of death worldwide. The American Heart Association, The American College of Cardiology and the Centers for Disease Control all recommend lifestyle modification as the first line of treatment, followed by medications if needed.  Some patients are prescribed up to 5 different medications to control their BP. However less than half of people are compliant with taking even one pill.  Moreover, these medications have side effects including impotence, fatigue, and muscle cramps, leading to recommendations to treat with Lifestyle modification, which was unanimously voted on by all these societies.  The lifestyle changes recommended included weight control, restricting salt and alcohol, exercise and adopting a more plant-based diet.  Foods from animal sources increases BP, and those eating a plant-based-diet have a 75% decreased risk of developing hypertension.

Data from autopsies in America show that atherosclerosis starts by age 10, and by age 23, 2/3 of Americans will have established disease. Although prevention is good, we also need to focus on reversal of heart disease found in most adults.  Our bodies have a need to heal and remove atherosclerosis already caused by eating damaging fats over and over, many times, three times a day!  The miracle cure is just to stand back and let our bodies heal by putting only healthy things in our mouths.  Plant-based diets are not just better and cheaper than medications, but they work better because they treat the causes of disease.  Healthy lifestyle choices reduce the risk of heart disease and stroke by over 80%.  Cholesterol and blood pressure medications only reduce the risk by 20-30%, so 70-80% of people compliant with taking these drugs still have events.  The choice is not diet or drugs, but rather, which drugs should be used as an adjunct to lifestyle modification.  We often refer to this as borrowing a medication until we can fix the underlying problem.

Over 20 years ago Dr. Dean Ornish published his “Lifestyle Heart Trial” (which in our opinion should have won him a Nobel Prize).  He showed that blood flow was improved by 200-300% within 1 year of making lifestyle changes.  He was the first to show that coronary disease was reversible, and this has since been repeated many times.  The more radical the changes, the more radical the reversal.  Ornish continues to drill home how changing lifestyle decreases the need for expensive and mostly ineffective procedures.

His results were based on eating a whole-foods, plant-based and low-saturated fat diet, and moderate exercise. Over a 5-year period, he showed by arteriograms a 10% regression in plaque, compared to those receiving standard of care as suggested by the American Heart Association (at the time) which showed a 20% progression of plaque (even while taking statins).  This is a 30% difference between the groups in just 5 years, which is highly significant because increasing the inner diameter of an artery by a factor of 2 (for example 10% open to 20% open), results in a staggering 11-fold increase in blood flow (Poiseuille’s Law).  His diet has been ranked as the single most healthy diet for the last 4 years in a row by every reputable nutritional society (8 of them) in the world.

Dr. Ornish also looked at prostate cancer in a similar way, and found a correlation behind cancer reversal, with these same lifestyle changes turning off 500 cancer promoting genes and turning on 250 cancer suppression genes, concluding that our genes are our predisposition and not our fate.

Dr. Kim Williams, the past president of The American College of Cardiology has been very vocal on this subject, reporting that, “There are 2 kinds of cardiologists, those who promote a plant-based diet and those who have not read the data.”  He adds, “I do not mind dying, but I do not want it to be my fault.”

Last year in the US alone, between 1.5 and 2 million stents were placed by cardiologists in arteries in patients that were symptomatic and had 85% blockage to circulation (insurance requires both criteria).  Yet, over 50% of heart attacks happen from arteries that are blocked 70% or less, and there is little evidence that these stents that are placed when the patient is not having an acute coronary event even prolong life.  Although both groups need intensive lifestyle modification, the latter group with less than 70% blockage needs to be identified and treated before they progress to more severe disease.

Inexpensive and non-invasive measures of arterial disease detection include carotid artery IMT studies where the thickness of the inner wall of the carotid artery in the neck (called the intima) can be accurately measured by ultrasound.  This test also establishes what is known as arterial age, compared to biological age, and addresses the urgency and intensity of Lifestyle intervention.  In 1690, Dr. Thomas Sydenham of Oxford University suggested that “a man is as old as his arteries.”  It only took 350 years to test this theory as true.  According to the US Preventive Task Force (USPTF), carotid IMT ultrasounds are considered the best non-invasive measure of what is happening in arteries in patients 45-75 years of age, with 2 or more risk factors.  This test identifies both plaque and inflammation in the artery and is performed in our office for those qualifying.  We also perform echocardiograms and cardiopulmonary stress tests when indicated.  Although plaque may take years to resolve with intervention, inflammation from diet and other factors (which also contribute to arterial age) can take weeks or months to resolve.  The carotid IMT is not just a tool to identify who to focus on, but also a tool to assess disease regression.

We have all become so conditioned to only be addressing cholesterol as “the” risk factor for plaque formation.  Recent studies have shown that 77% of heart attacks happen in people with a relatively normal LDL (bad) cholesterol (<130), and we have known for over 25 years now that 51% of heart attacks happen with a “normal” LDL (bad) cholesterol (<100).  Clearly, other factors are in play in these individuals.  Research studies over the last 2 decades have shown that there are over 400 risk factors for heart disease, including genes that predispose to high cholesterol like the APOE gene, sleep apnea, low vitamin D3, high insulin, high homocysteine, a very sticky inherited sub-particle of LDL known as Lp(a), LDL that is too low (<50) and HDL (good cholesterol) that is too high (>100).  Recent studies on HDL have shown that too much makes it dysfunctional and levels over 100 can double your risk of heart attack, contrary to conventional thinking.  Routine lab testing does not address most of these risk factors, which is why we do advanced, state-of-the art laboratory testing on every patient that qualifies.

The most commonly selected conventional therapies, such as stent placement and bypass surgery, do nothing to alter the pathophysiology of atherosclerosis. In April 2018, the largest meta-analysis of statin effectiveness, incorporating 32 trials and over 270,000 patients over a period of 4 years was reported in “The Journal of the American Medical Association” (JAMA).  The results of this analysis showed a mere 0.7% drop in absolute all-cause mortality, 0.5% drop in absolute risk of CV mortality, 1.4% decrease in absolute risk for heart attack, and 0.6% decrease absolute risk in strokes.  They did show a 2.26% decrease in absolute risk of major cardiac events, and in these 2.26% of patients that did respond, they reported that for every 38 mg/dl drop in LDL cholesterol with a drug, there was a 22% relative risk reduction in events.  Clearly a shameful example of statistics being used to manipulate an outcome.  Unfortunately, these relative risk reduction figures are advertised as promotion of statins on the home page of the American Heart Association.  These products sell more than 50 billion dollars of product a year in the US alone.

The future of medicine must shift to prevention and reversal of heart disease at earlier stages of pathology, the foundation of which is lifestyle intervention.  What about other approaches?

While statins have never been able to show reversal of atherosclerosis, several nutraceuticals show promise.

In a recently published randomized trial from China, 76 patients with carotid atherosclerosis were treated with either Nattokinase (NK) 6,000 FU or simvastatin 20 mg.  In both groups, cholesterol fell, and in the NK group HDL rose, but reversal of atherosclerosis over 26 weeks was profound with NK and plaque volume fell by 37%.

Another agent, Bergamot (Formulated as LIPIDPRO) by our office, was studied in patients with atherosclerosis over 6 months without randomization.  Lipid fractions improved as anticipated during therapy with Bergamot and there was a stunning decrease in carotid thickening from 1.2 cm to 0.9 cm.

A final promising combination therapy has been reported to promote the reversal of carotid atherosclerosis.  The study combined Pycnogenol with Centellicum Asiatica (Arterial Protect by Life Extension) and followed 391 patients with ultrasound measurements of plaque for over 4 years in a randomized trial.  The progression of plaque over time was least in the patients with the combination nutraceutical and there was a reduction in the number of angina episodes and heart attacks in the treatment group as well.

Another supplement we call Deliquesce combines nutrients known to also improve cholesterol profiles consistent with low doses of statin drugs without the side effects.

For the convenience of our patients, we stock all 4 of these agents which can be combined for our patients’ personalized needs.

Advances in the early detection, prevention and reversal of atherosclerosis are sorely needed.  These studies give hope that even for patients with advanced disease, lifestyle and nutraceutical therapies can improve disease outcomes and quality of life.