You may have a family history of heart attack or stroke. Or you may have suffered through multiple miscarriages. Or maybe you struggle with chronic migraine headaches, irritable bowel syndrome or bipolar depression. Perhaps your child has autism, or your sister has multiple sclerosis. These are just some of the conditions linked to a faulty enzyme called MTHFR. 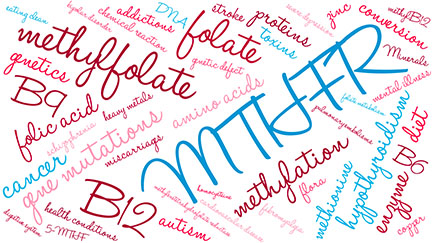 MTHFR stands for methyltetrahydrofolale reductase and is one of the most important enzymes in human physiology, having influence on as many biochemical processes as it has syllables in its nearly unpronounceable name. It is vitamin dependent and is involved in the metabolism of folate (Vitamin B9) and homocysteine. The product of the reaction catalyzed by MTHFR converts homocysteine (a potentially toxic amino acid) to methionine (a useful and necessary amino acid) and eventually to S-Adenosylmethionine (SAMe) (a crucial DNA methylator). This is a process known as “methylation.” SAM-e is critical for the regulation of over 200 enzyme systems in the body, which is second only to ATP (the body’s cellular power unit). Without ATP or SAM-e, life ceases. Certain mutations in the gene encoding MTHFR produce an enzyme that reduces activity that can lead to elevated homocysteine levels. High homocysteine levels and/or not enough SAM-e can double or triple the risk of developing some illnesses.

Methylation is a core process that occurs in all cells to help the body make biochemical conversions. When people with MTHFR mutations are exposed to toxins or drugs or any foreign substance, they have a harder time getting rid of them, which can cause them to feel ill or get ill. The methylation process is responsible for:

There are two main variants associated with MTHFR. The 677T variant is most commonly associated with early heart disease, blood clots, stroke, leukemia, colon cancer, and schizophrenia. The 1298C variant is most commonly associated with a variety of chronic illnesses related to neurotransmitter production, nitric oxide production (poor arterial health) and detoxification of ammonia. The 1298C gene does not appear to influence homocysteine but increases the risk of disease related to the 677T gene mutation 2-3 fold when they occur together and with elevated homocysteine. The MTHFR anomaly is reported as either heterozygous (one affected gene and one normal gene) or homozygous (both genes are affected which is more serious). The worst combination is 677T/1298C in which you are heterozygous or homozygous to both anomalies.

Glutathione is our body’s main antioxidant and detoxifier. One of the ways that MTHFR gene mutation can make you susceptible to illness is by lowering your body’s ability to make glutathione. People with MTHFR gene mutation usually have a low glutathione, which makes them more susceptible to stress and less tolerant to toxic exposures. Accumulation of toxins in the body and increased oxidative stress can lead to accelerated aging.

Problems that can be associated with MTHFR include:

Fortunately MTHFR can easily be tested and treated. If you are found to have one or more of the 677T gene mutations, associated with an elevated homocysteine, or symptoms related to having 2 copies of 1298C, without an increase in homocysteine, you can supplement with “Methylation Support,” our specifically formulated product containing vitamins and cofactors including Methyl-folate and Methyl-B12 (the active forms of these vitamins). Although these mutations do impair the regulation of homocysteine, adequate methyl-folate levels essentially “cancel out” this defect. We also suggest a course of “Purify,” our formulation for detoxification every 6 – 12 months, to increase glutathione and rid the body of accumulated toxins.