Vitamin D3 and Vitamin K2:  Vitamin D controls the absorption of calcium into the blood. It has anti-inflammatory properties that are critical to preventing osteoporosis, and it has been shown to modulate inflammation throughout the body. Additionally, it is important to have high enough vitamin K2 levels. Vitamin K2 lays calcium into bone. Without it, vitamin D will be absorbed into other tissues, for instance, in arteries (which is a BAD thing).

Vitamin D is made from a cholesterol nucleus that is activated by UV rays from the sun. It is stored in the liver as 25-OD-Vitamin D and activated by the kidneys. We have known for years that vitamin D is important to bone health, and a blood level of 20 ng/ml was enough for this result. Over the past two decades vitamin D has been promoted to hormone status and is essential for balancing the immune system and promoting intestinal integrity. In a recent study (Clinical Diabetes, 2018) vitamin D3 was shown to improve insulin sensitivity and support weight reduction and help with fatigue in obese individuals. It combats inflammation and decreases the risk for several types of cancer. 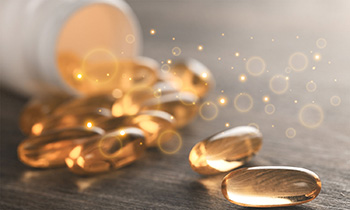 Results from a new study published in PLOS ONE on June 18, 2018 which looked at 5000 women over 55 years of age found that blood levels exceeding 60 ng/ml had an 80% lower risk of breast cancer compared to those with levels less than 20 ng/ml. This study was funded by the NIH (no second agendas) and supports a similar study from 2007 showing a 60% lower risk of all cancers compared to those on placebos. As noted above, vitamin D has also been shown to improve insulin sensitivity and reduces fasting insulin levels by reducing low-grade chronic inflammation in muscles and the pancreas. To get these benefits, we need much higher blood levels with 50 – 80 ng/ml being optimal. Adding Vitamin K2, a fat-soluble vitamin, in doses up to 320 mg/day is helpful in promoting bone formation from the calcium absorbed and keeping the calcium out of arteries, brain and kidneys. Vitamin K2 is also a leading anti-aging vitamin and improves brain health, energy production, oxidative stress and metabolism as well as reducing the risk of heart disease, kidney stones and cancer development. It is naturally found in dark leafy greens and the best supplement is the K2-7 variety because it is more natural and stays in our blood longer.

Omega-3 Fatty Acids (especially DHA) are essential for overall health and optimal central nervous system function. It is our body’s most powerful natural anti-inflammatory, and since most chronic illnesses are founded upon inflammation, it serves many purposes.

It is highly concentrated in the brain within metabolically active neuronal regions including synaptic membranes and synaptic vesicles and mitochondria as well as keeping the integrity of the blood brain barrier, which makes up over 15% of the cerebral cortex. Optimizing levels can reduce the incidence of mild cognitive impairment by 50% with improved cognition and memory.  Inflammation is known to play a major role in the development of Alzheimer’s disease. People with the APO E-4 genotype seem to have lower concentrations of DHA and altered metabolism, requiring higher doses of omega-3s for prevention of memory decline (up to 3 grams a day). In addition, post-menopausal women with the APO E-4 genotype are also at much higher risk of memory decline, perhaps as a result of loss of the neuroprotective effects of estrogens, which play a role in neuroplasticity, neurotransmission and the integrity of the blood brain barrier. Studies on blood cells of Alzheimer’s patients show that omega-3 supplementation for six months alters the expression of 19 genes involved in inflammation and neurodegeneration, suggesting a direct effect on gene expression.

Most chronic illnesses are founded upon tissue damage and resulting inflammation. Omega-3 goes beyond suppressing inflammation by promoting healing and actively protecting against cellular damage. The standard American diet is loaded with pro-inflammatory omega-6, which leads to a chronic inflammatory state. Omega-3 helps prevent atherosclerosis by dropping triglycerides and preventing platelet clumping in arteries. It also improves endothelial function and stabilizes plaques, making them less likely to rupture.  It is no wonder that high doses of omega-3 supplementation reduce coronary heart disease related deaths. This effect, like the impact on brain inflammation, requires higher than standard doses (3000 or more mg/day).  These same doses also improve insulin resistance and blood and liver lipid levels and improves sugar control in type 2 diabetes by 11%.  Additionally, omega-3 in combination with exercise has been shown to increase bone mineral density in post-menopausal women, largely through their anti-inflammatory effects.  Moreover, omega-3s have been shown to decrease the pain and stiffness caused by osteoarthritis by reducing the chronic inflammation associated with cartilage destruction.

Vitamin B12, also called cobalamin, is involved in the metabolism of every cell in the human body. It is a water-soluble vitamin that is cleared from the body quickly; supplements need to be taken twice a day. It is produced by bacteria found in dirty water and because of chlorination and purification systems, it is advised that everyone use a supplement. It is found naturally as adenosyl cobalamin, which is the storage form in the liver and methyl cobalamin, which is the biologically active form. It is a cofactor in DNA.

Acid in the stomach is required to make vitamin B12 available for absorption through proper digestion. It facilitates the metabolism of vitamin B9 (folate) and is a cofactor in the production of protein from amino acids and in fatty acid metabolism (production of energy from fats).  It also functions as a methyl donor which lowers homocysteine levels that can increase the risk of vascular disease and dementia. It is particularly important in the normal functioning of the nervous system via its role in the synthesis of myelin which increases the speed by which nerves transmit information.

Vitamin B9 comes in different forms but the natural form found in foods is called folate. Its richest sources are dark green leafy vegetables, beans, wheat germ, and yeast. It is a cofactor in many of the same chemical reactions as vitamin B12, involved in protein synthesis, DNA synthesis, controlling homocysteine levels to prevent vascular disease and dementia and red blood cell maturation. It also helps to regulate cell growth in infancy and pregnancy, reducing birth (neural tube) defects by more than 70%. Folate also appears to protect against the development of some forms of cancer, particularly colon cancer and breast cancer. It also is beneficial to the aging brain and protects it from Alzheimer’s and other forms of dementia.

Purify, specially compounded for our patients, is specifically formulated to enhance phase 1, 2 and 3 of liver detoxification. Purify works by increasing the production of glutathione (the ultimate detoxifier) production by up to 70%.  It is intended to assist with the removal of harmful waste products, toxins released from fat after rapid weight loss and for treatment of fatty liver disease.

Purify contains Milk Thistle which promotes phase 1 of liver detoxification, preventing damage from excess alcohol, maintaining bile flow, increasing glutathione production (the ultimate detoxifier), and protecting the liver from damage from natural, environmental and mineral toxins like iron and copper.  Alpha Lipoic Acid (ALA) stimulates Phase 2 detoxification via glutathione to remove chemicals and heavy metals from the liver. It also modulates gene expression to help insulin work more effectively, slows brain aging, improves immune function (cancer fighting), and facilitates energy production. N-Acetylcysteine (NAC) is a non-essential amino acid that is needed to make glutathione which is the mainstay of phase 2 detoxification. Sam-e also promotes methylation pathways that are essential for phase 2 detoxification as well as energy production. Turmeric and garlic act as powerful anti-inflammatories that assist with liver detoxification and biliary problems.  Cilantro has been shown to be useful in removing toxins through the gut and preventing reabsorption (phase 3 detoxification). It also is helpful in heavy metal chelation and is a powerful antioxidant.