In Chicago in the 1990s, the Chicago Health and Aging Project was started, and they began to start looking at what people were eating. They divided patients into 2 groups and found that people eating a lot of animal and trans-fats had a 4-fold increase in the incidence of Alzheimer’s.  In Finland, researchers looked at “mild cognitive impairment” and did a similar study looking at 1000 adults over 50 and found the same results.  When researchers looked at the APOE-4 gene, they found the same correlations with fat intake and mild cognitive impairment.  Most importantly, they found that those who have the gene and eat a plant-based diet, cut their risk by 80% just by restricting animal fats.

They also found that there are metals in plaque, which include copper and iron.  These metals oxidize and shed free radicals (elements that act like sparks that damage the connections between cells).  The iron may be coming from meat, or an iron skillet, while copper is most likely coming from copper pipes.  Both metals are toxic to the heart, pancreas and the brain.  Antioxidants like Vitamin E (nuts and seeds) for iron and C (citrus) for copper help prevent this oxidation.  There are 8 types of Vitamin E, and it is best to get them from your diet.  Studies done at the University of Cincinnati looked at color in the patients’ food and found improvement in memory. 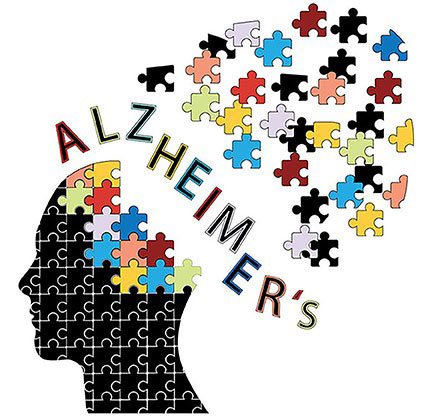 Alzheimer’s disease (AD) is the third leading cause of death in the US and the leading cause in the UK.  It is the most common type of dementia, which is associated with memory loss and decreased cognition.  Increasing age is the greatest risk factor.  It starts as mild cognitive decline and progressively worsens with time.   Women in their mid-60s are more likely to develop AD than breast cancer and 66% of women will develop AD as opposed to 34% in men, which is thought to be related to estrogen deficiency.  This is one of the most feared of all diseases because no one wants to even imagine what it would be like not to remember all the things that have made their life special.  Even worse, everyone knows someone who has survived cancer, but few have heard of an Alzheimer survivor.  Drug therapy is limited to barely slowing the progression of disease, and to date, there are only 2 drugs in this category (Aricept and Namenda) and both have significant side effects.  Clearly, drugs are not the answer.

If you could examine the brain of someone with AD, you would see “meatball-like” structures between the cells on a microscopic slide. They are called beta-amyloid plaque, which affects half of Americans by their mid-80s.  If you ask conventional medicine how to avoid this, the response is, “It is genetics,”

There is a gene and it is called the APOE-4 gene. If you inherit this from one parent your risk is tripled, and if you inherit it from both parents your risk is 10-15 times the population who do not carry the gene.  So, should we be satisfied with “old age’ or “genes” and wait?  Maybe not!  Remember that dimmer switch analogy where gene expression can be turned up or down by lifestyle?  Even though we cannot turn them completely off, genes are not our destiny, and can be turned downwards after just 3 months when adding color to one’s diet like blueberries and grapes.

The University of Illinois did a study looking at 120 older adults studying the effect of exercise on the size of the hippocampus.  The hippocampus acts as a switchboard that determines which memories are important and should be saved as memory, and which were not.  The hippocampus gradually shrinks with old age, which was found to be reversed by cardio exercise.  This consisted of a 10- minute brisk walk, 3 times a week, gradually increasing to 5 minutes weekly until the research participants reached a goal of 40 minutes, 3 times a week.  It was concluded that cardio exercise reversed mild cognitive impairment, halted brain shrinkage and reversed the shrinkage noted in the hippocampus.

Recent studies done by Drs. Dale Bredesen and Daniel Amen (2014 to present) have demonstrated in thousands of patients that AD is preventable and cognitive decline is often reversible.  They have identified further underlying causes and once these causes are addressed, outcomes were significantly impacted.  Based on these causes, treatment could be personalized, and that by addressing these causes, they could prevent AD and reverse 90% of mild cognitive impairment.  Dr Bredesen divided these causes into 3 categories:  1) Inflammatory factors such as that achieved by eating a high fat diet, especially if APOE-4 was present. Other lifestyle factors related to poor diet include lack of exercise, chronic stress, hypoxia (low oxygen) caused from sleep apnea, smoking, chronic insulin resistance and diabetes with high insulin, obesity, food allergies associated with intestinal permeability issues (gluten, milk and eggs), and some infections such as periodontal disease.  2)  Atrophic factors are factors that inhibit new brain cell production.  These include nutrient deficiencies such as Vitamin D3, Omega-3, and B-vitamin deficiencies (Vitamin B12 deficiency increases AD risk by 4-fold) and replacement type will depend on your MTHFR status (a gene that influences how you use B12), homocysteine (a breakdown product of protein) accumulation (from B-12 deficiencies and other causes) can increase your risk of AD  by 2-fold, and hormone imbalances – but especially estrogen deficiencies. 3) Toxic factors such as toxic metals as those noted above including mercury exposure from fish or amalgams and certain molds.

They also noted a subtype caused by insulin resistance, which is called 1b subtype of AD because it is a hybrid causing inflammation and poor growth of new neural tissues.  Insulin resistance and resultant high insulin levels encourages beta amyloid plaque to build up because the enzyme that breaks insulin down is the same enzyme that degrades insulin in nerve cells (insulin degrading enzyme) and when insulin is high, it is too occupied with removing insulin to focus on amyloid. The plaque accumulates.  Also, Insulin slows the production of a hormone called brain neurotropic hormone that is responsible for stimulating the production of up to 500,000 new neurons a day.

Prevention is therefore centered on promoting good lifestyle habits including good nutrition such as greens, mushroom, chia/flax seeds, blueberries/grapes, dark chocolate and coffee.  The foods to avoid include pro-inflammatory animal products (dairy, meat and eggs).  Cardio exercise increases the production of brain neurotropic hormone causing new neuron growth, and resistance training has been shown to decrease insulin resistance.  Other lifestyle considerations include adequate quality and quantity of sleep as this is when new memories are consolidated, CPAP compliance if you have sleep apnea, smoking cessation and building stress resilience.

Remember, your genes are not your destiny!  You can control their expression if this is something that concerns you because of family history.