Leptin and its Role in Appetite

Leptin and its Role in Appetite and Metabolism

Meet Leptin – a hormone that regulates body weight by signaling your brain when you are feeling full during a meal.

Leptin is predominantly made in adipose (fat) cells and the cells lining the small intestines (enterocytes). It regulates the balance in a person’s metabolism by inhibiting hunger, which in turn diminishes fat storage. Leptin attaches to receptors in an area of the brain called the arcuate nucleus in the hypothalamus that regulates appetite. 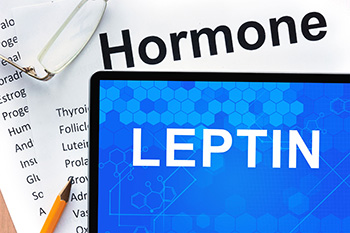 The danger of obesity is that too much fat impairs the signaling of leptin, resulting in the inability to detect satiety (feeling full). Despite the presence of high energy stores (fat) and high leptin, people still feel hungry. One of the most common mistakes people make is restricting calories. Although leptin is the “feel full” hormone, it also directly slows your metabolism when it is present in high amounts. When you eat a low-calorie diet, instead of losing only fat, you lose muscle. Since muscle is the principle driver of your metabolic rate, it becomes difficult to lose fat (weight is on a plateau) because of your high leptin level, and muscle loss drops metabolic rate even further.

Fat inhibits both leptin and insulin signaling and causes resistance to both hormones. This results in more and more hormone produced to compensate for loss of sensitivity with associated increased hunger, especially sugar craving. Excessive sugar craving leads to sugar addiction, which may require special assistance (medication) to recover. Eventually, leptin signaling is so impaired that both metabolism and hunger diminishes, and weight loss seems impossible. When this happens, calorie restriction reduces metabolism even more. A vicious and cruel cycle!

With the rate of obesity at an all-time high in the United States, it is safe to say we need to rethink our approach to weight loss. Approximately 72% of Americans are now overweight or obese, and it has been estimated that by 2030, half of America will be obese. One of the largest contributing factors in the rise of obesity is not just the poor-quality food that we eat, but also that once one becomes obese, it is very difficult to reverse.

How to reset Leptin (and Insulin) Sensitivity:
We have put together a list of natural ways to help reset sensitivity to leptin and insulin. The following are some of the best ways to naturally improve your leptin sensitivity.

Increase Fiber: Most people do not consume enough fiber in their diets. Fiber helps us feel full longer. Given that one of the main functions of leptin is to make us feel full, it stands to reason that increasing fiber will improve our body’s ability to sense leptin. Some of the best foods to increase your fiber intake include avocados, apples, pears, most vegetables, oats and beans.

Cut Out Sugar: Sugar is a major driver of leptin resistance, and hence its relationship with insulin resistance, prediabetes and diabetes. In America, the main contributing factor is liquid sugars in the form of sweet tea, fruit juice or sodas. We are also conditioned at an early age to appreciate very sweet desserts. Some authorities consider sugar to be more addictive than heroin, and sugar addiction is a very real phenomenon. Fructose is also a sugar and is found in fruit. Eat 3-4 servings a day and try to stick to fruits with a low fructose level such as berries or apples. Always avoid high fructose corn syrup and artificial sweeteners in food products.

Be Carb Smart: Carbohydrates get a bad reputation. Most foods contain some form of carbs. Carbs come in two families: simple carbs (starches) and complex carbs containing more fiber. The goal is to consume more foods that are high in complex carbohydrates such as whole grains, potatoes, beans, brown rice, quinoa, vegetables etc. Complex carbs take longer for our bodies to break down, and as a result they create a feeling of fullness for a longer period, which naturally restores one’s sensitivity to leptin.

Consume Omega-3: Omega-3 is found in fish, and in spirulina, chia seeds and flax seeds. Most people do not consume these foods in high enough quantities, and it may be beneficial to consider a supplement in the form of algae or fish oil. Omega-3 increases leptin sensitivity.

Don’t over restrict: Extreme calorie restriction (less than 1000 calories per day in women and 1500 calories per day in men) has been shown to increase leptin levels and decrease our body’s sensitivity to leptin. Fasting for short periods can be a great way for your body to reset. However, lowering your daily intake for prolonged periods of time forces your body to take drastic measures such as slowing down your metabolic rate. In order to start losing weight again you end up having to lower your calories again and again. The net result is loss of muscle and a permanent drop in metabolism. Instead, make better food choices with good portion control and you won’t have to worry as much about calories.

Exercise: Cardiovascular exercise, and especially High Intensity Interval Training (HIIT) is a great way to shake up your metabolism. During the higher heart rate time frame during HIIT, you burn the most amount of fat. Combine this with a little resistance training (weights) to keep muscles strong and toned. Remember, your muscle mass is the greatest determinant of your metabolic rate. Put simply, the more muscle you have the more you get to eat.

Make Sleep a Priority: Lack of sleep causes an increase in our stress hormone called cortisol, which causes the body to store even more fat and inhibits fat breakdown. This is especially true if you suffer with sleep apnea. Uncontrolled sleep apnea is the biggest roadblock to weight loss because it is the atomic bomb of all stressors associated with the release of large amounts of cortisol and sugar. Make sure you are getting 7 to 8 hours of sleep a night and wear your CPAP if you have sleep apnea.

Become More Stress Resilient: Stress in today’s modern lifestyle is hard to avoid. One of the hormones that stress increases is cortisol. As mentioned previously, cortisol can cause our bodies to hold fat, increasing fuel for a “fight or flight” stress response, which gets deposited as fat (storage) if it is not burned as intended. This puts us at an even higher risk for lack of sensitivity to leptin. There are several ways to naturally reduce your stress levels. One of our favorite options is meditation. Others include a nature walk, prayer, and even exercise. Yes, exercise has been shown to improve our response to stress better than any medication on the market (especially cardio).

Eat Meals Earlier: We should always try to push most of our calories during the morning and early afternoon, so we are more likely to burn them rather than store them. Eating after 7:00 pm cannot only contribute to insomnia and reduce your time sleeping, but it also causes your stomach acid levels to rise. One of the most difficult jobs that our bodies perform is food digestion, and eating after 7:00 pm forces your digestive system to work harder, and the calories consumed are often stored as fat rather than burned as fuel.

Reduce Inflammation: Inflammation contributes to reduced leptin sensitivity. Fat is highly inflammatory and most people with obesity have elevations in blood markers for inflammation called CRP. Inflammation is one of our body’s natural self-defensive mechanisms. Unfortunately, inflammation is not meant to be experienced long term. The “standard American diet” is high in inflammatory foods, which can lead to several health issues such as joint pains, heart problems, and more. Diets that are rich in anti-inflammatories consist primarily of fruits and vegetables.

A Whole Food, Plant-Based Diet, Exercise, Good Quality, Adequate Sleep and Stress Resilience: These are the four main pillars of Lifestyle Medicine and are the best changes one can make to restore normal sensitivity to leptin. A happy and healthy life is closer than you may think. Our health is something we all must deal with daily, and when we do not feel our best, it shows. If you are tired of just making it through the day, then you need to start investing in your health today!

You are not alone on this journey and we are here to help every step of the way.