Health starts in the Gut

Over the last decade, a novel concept has emerged that shows that many chronic health problems start in the gut.  It is odd that we refer to this as “novel” because Hippocrates, the father of modern medicine, famously said that, “All diseases begin in the gut.”  Increased intestinal permeability (also known as Leaky Gut), and our gut flora play a much bigger part of chronic conditions than just gas, bloating, diarrhea and constipation.  We are only just beginning to appreciate the importance of our gut flora.  It has been estimated that 100 trillion bacteria live in our gut.  This represents 10 times the number of cells in our body proper, accounting for 99% of our DNA, and combined, there are over 2000 species of both good and bad bacteria, weighing an estimated 3 pounds.  Interestingly, this is also the weight of the average human brain.

The small intestine has a one cell thick membrane that acts as a barrier protecting us from the intestinal contents.  When this lining is compromised, and things start to “leak” into the deeper tissues of the intestine, havoc reeks!  Particles such as toxins, incompletely digested fats, proteins and carbohydrates, and pathogens known as bad bacteria, viruses and parasites invade the deeper layers of the intestine and even enter the blood stream.  Once in the blood stream, they are carried everywhere in the body.  This fragile one cell membrane is our first line of defense against what is present in the intestine. Once the integrity of this membrane is compromised, an inflammatory reaction is launched to heal it. Failing this, our next line of defense is the immune system. Inflammatory chemicals are produced by our immune system around the intestinal tract to amplify the inflammatory response and heal the defect.  Unfortunately, sometimes the immune system goes into an “overkill mode,” which also destroys healthy tissue by a mechanism we know as an autoimmune disorder.

Today, there is substantial evidence that increased intestinal permeability and the resultant inflammatory and immune responses are the root cause of many autoimmune diseases.  Most importantly, reversing the cause of intestinal permeability and repairing the gut is the key to regulating optimal health and slows or reverses the production of autoantibodies.  Research published in mainstream medical journals have demonstrated a connection and/or cause between intestinal permeability and Hashimoto’s thyroid disease, celiac disease, eczema, allergies, asthma, fibromyalgia, chronic fatigue syndrome, psoriasis, inflammatory bowel disease (Crohn’s and Ulcerative Colitis), irritable bowel syndrome, Lupus, Rheumatoid arthritis and Type 1 diabetes. 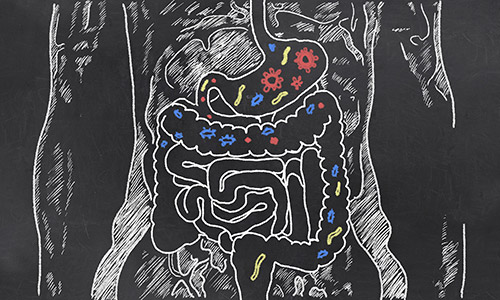 New research has also shown an association between intestinal permeability and changes in our behavior, thoughts and mood.  A study published in 2013 in ACTA Psychiatrica Scandinavica, demonstrated that about 35% of depressed patients have signs and symptoms of intestinal permeability.  This makes sense when we consider that up to 80% of the serotonin (the “happy neurotransmitter”) is made in the lining of the gut, which becomes compromised when it is defending intestinal invaders.

Also, hidden in the digestive system there are millions of nerve cells that communicate with the head.  This is sometimes referred to as your “gut brain.”  Perhaps this is what gives us “butterflies” in our bellies when we are nervous.  These nerves can trigger emotional shifts in people who have poor gut health.  Scientists are coming to understand that there is a relationship between what we eat and brain function.  For example, eating a diet rich in processed food and sugar leads to spikes in the production of excitotoxins that causes the nerve cells in the intestinal tract to send a signal to the brain that causes an alarm mode known as “brain fight or flight” resulting in anxiety and feelings of stress.  On the flip side, when we are feeling a lot of anxiety from high stress situations, the brain causes the release of adrenalin and cortisol as our “body fight or flight” defense, which then communicates with the nerves in the gut and causes stomach upset, bloating and diarrhea.  And one of the more common delayed allergic symptoms to foods is what is referred to as cognitive dysfunction or brain fog.  Within minutes, one experiences global brain dysfunction that can last for an hour or days, characterized by fatigue, problems with cognition, multitasking and word finding.

Studies have found a direct link between heart attacks, stroke, heart failure and death with chemical products created in the gut when foods high in dietary fat, which are common in the Standard American Diet are ingested.  Key studies performed by Dr. Hazen of the Cleveland Clinic have uncovered a mechanistic link between the gut microbes and heart disease via a substance called TMAO (trimethylamine-N-oxide).  TMAO is formed in the bacteria found in our intestines, from nutrients found in animal products.  Specifically, certain bacteria in the intestines turn Choline (a byproduct of lecithin found in meat, egg yolks, and high fat dairy products), and L-Carnitine (found in red meats and energy drinks) into TMAO.  This is absorbed into the blood stream and the liver then transforms it into trimethylamine (TMA), which then triggers inflammation in blood vessels contributing to plaque formation and plaque instability, raising the risk of heart attack.  This pathway has subsequently also been shown to contribute to heart and kidney failure.  They found that higher TMAO levels in patients more than tripled the risk for all cause of death.  In the case of chronic kidney failure, they found that consuming foods high in choline triggers scar tissue formation (fibrosis) in the kidneys that caused kidney function to deteriorate.  This may explain why diets low in animal protein have been prescribed for decades with good results for patients with kidney failure.  Conversely, diets high in animal protein often lead to kidney failure.

These studies show clear evidence that links microbes to metabolism and heart health, and diet is the single largest factor that impacts gut microbe composition and function. “The studies to date, suggest that adopting a diet where one eats less meat and animal products, like a vegetarian or vegan diet as well as Mediterranean (more plant based) diet, might be particularly beneficial, especially if you have a high cardiovascular risk, heart failure or chronic kidney disease,” says Dr. Hazen.

Many factors contribute to increased intestinal permeability, but most cases are caused by one of four culprits: Medication, Diet, Pathogenic Infections, and Food Allergies.  Medications such as acid suppressing drugs, over the counter and prescription anti-inflammatories such as Ibuprofen and Naproxen, and long-term antibiotic exposure all disturb the natural balance in the gut between beneficial and non-beneficial bacteria.  This is known as small intestinal bacteria overgrowth or SIBO and has also been linked with Irritable Bowel Syndrome with pain, bloating, and diarrhea or constipation or both.  An imbalance in the intestinal flora, whether from yeast or pathogenic (bad) bacteria can also upset the integrity of the intestinal lining.  Diets low in leafy green vegetables and high in fat, sugar and starch also compromise the intestinal membrane and high sugar/starch diets also causes the overgrowth of both bacteria and yeast, which form toxins that contribute to pain and disability when the membrane is compromised as found in conditions like fibromyalgia.  Finally, food sensitivities and allergies can result in a breakdown in the intestinal lining.

All these can trigger intestinal inflammation and activation of the immune system, which leads to fatigue, cognitive dysfunction (brain fog), behavioral problems, muscle aches, and intestinal discomfort and irregularity.  When autoimmune disease is triggered, it can cause severe pain and disability.  When TMAO enters us through this fractured membrane (also known as leaky gut), it contributes to heart disease, heart and kidney failure, and death from all causes is increased three-fold.

Once intestinal permeability is suspected, there are many tests that help to identify the offender.  Food allergy tests determined from a blood sample aid in identifying specific foods to avoid.  These diets are easily reviewed by our registered dietitian.  SIBO can be diagnosed by a simple breath test, and once identified is easily treated with antibiotics.   Additionally, a stool analysis may be ordered to determine if there is evidence of malabsorption, inflammation and pathogenic organisms which help identify causation and guide treatment.

Once diagnosed, increased intestinal permeability is treated by removing the offending cause, such as a medication like Ibuprofen, or a food such as gluten or specific bacteria with antibiotics.   Regardless of cause, the treatment for the inflammatory reaction caused by intestinal permeability and TMAO includes adopting a “gut-friendly,” “anti-inflammatory” diet that emphasizes leafy green vegetables and bright colored fruits and vegetables rich in anti-inflammatory nutrients.  Dietary supplements and prescription medicine that aid in the repair of the intestinal membrane may also be recommended by one of our providers.  Listen to your gut and get it checked.  The standard endoscopic tests only address changes in anatomy such as polyps or tumors and sometimes severe inflammation in the colon or esophagus, but these tests do not go as far as the small intestine.  If you have been told that “everything looks normal,” please understand that the function of the gut cannot be tested by “looking at it.”